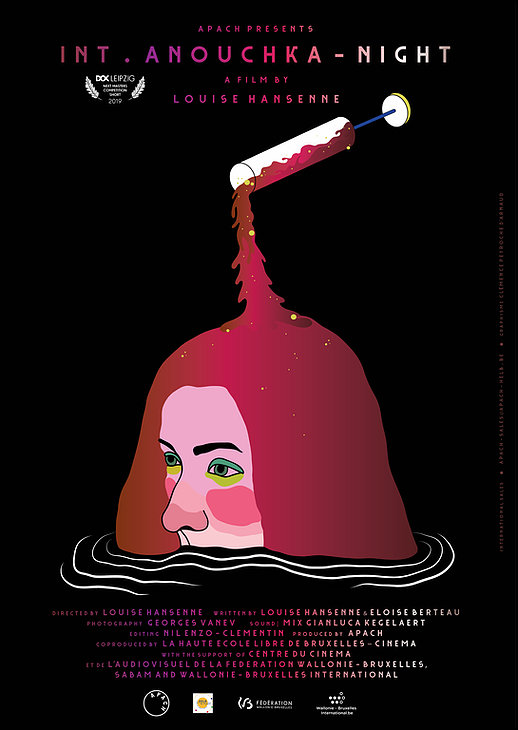 Anouchka is thirty and a scriptwriter. She earns her living in a bar. For this short film she wrote an autofictional scenario about her struggle with addictions. The setting: Anouchka reads her text in a nocturnal studio and discusses it with the director. Gradually, reading and speaking are beginning to mingle with her first-person narrative.

Two years ago, I landed a job as a waitress in a bar called “Le Petit Canon”, where I met Anouchka. Quite a character with whom I often party, yet never touching on her alcoholic past. As we get to know each other, she starts to tell me her story. She has suffered from alcoholism since she was 17 years old, which is triggered in a very episodic way. Anouchka has an excessive character and juggles between different lifestyles, between Black-out Trash and life as a nun.

Anouchka tells me about what she calls “the Bukowski effect”: ” This is a person who has this strength to convince her/himself that she/he doesn’t have an addiction problem, or even a self-destruction problem. They just have an exacerbated need for adrenaline, to escape from reality, as if suffering from a disease of the emotions. Because they are simply a bon vivant, a party person, a person who burns their life at both ends and pisses you off. ”

To which she adds, “I’m exactly like that. So I’m not genetically programmed to be a stable, balanced person. ”

This need to escape to the point of harming oneself has intrigued me for a long time and I discovered in Anouchka the ideal character. She is totally aware of her addiction and talks about it without taboo. Strong and fragile at the same time, she can also break down by going back into certain memories. But she is also a fighter. She continues to look for answers and solutions to her problem, which allows for an interesting dialogue on the struggle she lives every day.

On the other hand, Anouchka is a screenwriter but she can’t make a living from it. I wonder about the link between cinema, a great field of failure and disappointment, and her constant need to detach herself from reality. Is it the failure that drives her to drink in order to remain in the romanticism of a flayed author, or the boredom of her food job in a wine bar (bad idea right, the wine bar)?

It was over a drink one evening at the end of the service that Anouchka told me that she had fallen off the wagon and I suggested to make a film about her. Anouchka answered: “If you can help me, film me. Maybe it will help me get better, maybe not. But you will have a film. ”

I don’t really know why I started studying cinema. I’ve never been a film buff, I prefer reading and writing. I wandered between Inraci and IAD for a while, looking for my place, thinking I was completely lost. The project with Anouchka was a wonderful adventure for me, which made me want to write again, to create encounters.