Play me, I’m yours 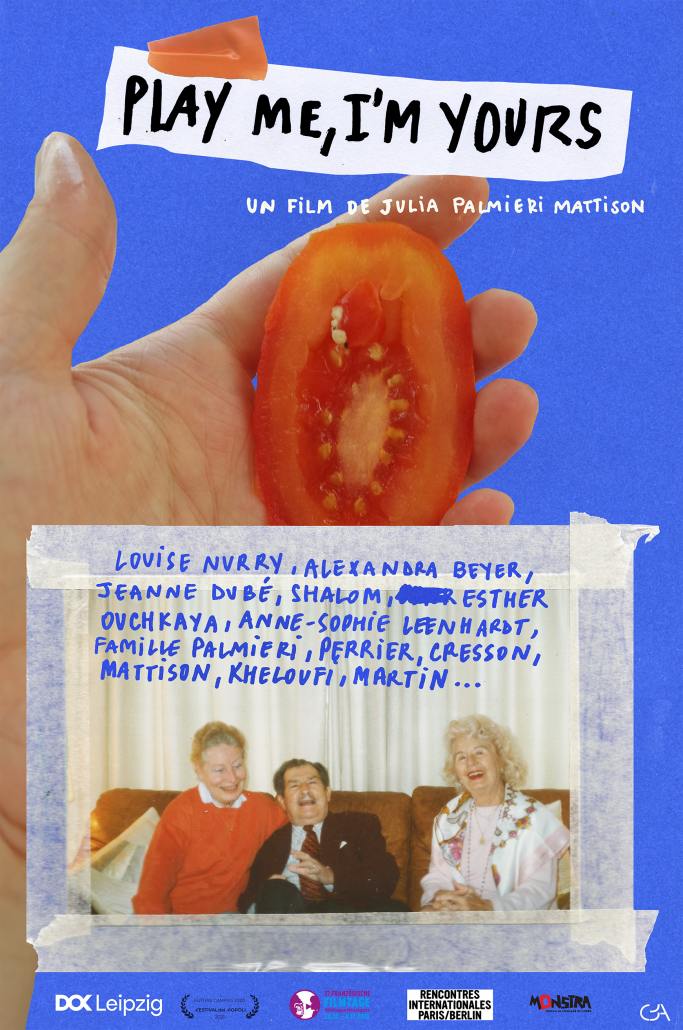 Around a loud meal, in a bed where we shared a pack of cookies, a discussion while we were washing, I was preparing to eat and mom had just bought home a bouquet of flowers to put on the living room piano. I should have never fucked him, she did so well to sleep with her, I’ll call you tomorrow to talk, I first have to call my grandmother. Friendship, love, family, relationships, interactions, death, women, men, food, that all gathers and divides and it’s porous.

Play me I’m yours deals with human relationships, family, friends and love relationships. It’s an attempt to show a possibility, to break down the dictated categories, so as not to be forced to stay in them. Let them become porous. In a certain climate and family environment, in 2020, dialogues can be written. I wanted to archive moments, everyday, insignificant, discussions exchanged, guided by cell phones, always on. Whether they are filmed or photographed, whether it is a sound recording or a collected note. I wish to approach short moments of life, often specific to a generation while making them dialogue between them. To archive the “unspectacular”, the discussion that will be forgotten, a packet of cakes shared in bed, someone playing the piano in the living room while dinner is being prepared. The discussions of the women in my family around a photo album and the questioning linked to the memory to which it refers, to their own snapshot. It is the sororities and adelphities that fascinate me. I have always been passionate about community, but it was my experience in a single-sex boarding school that led me to document, years later, the three women I would live with. They became the main actresses of this short film. I film on a daily basis, without a pre-written script, my research makes up my work. I record discussions, I film moments of groups, of sharing, of everyday dialogues, guided by characters who are my closest circle. Snippets of filmed moments, discreetly recorded, I also collect their associated objects, the piece of paper that was lying around while we were talking and that will now be associated with them forever. Living with a roommate brings a multitude of moments of intimacy, unexpected bed sharing and strangers in the room next door.

Play me I’m yours is about not wanting to forget a short period of time that you wouldn’t have saved. I have placed myself as the secretary of our memories, of your toxic exes, of the ones we mourned, of the ones we cheated on and of the ones we shared and how our friendship withstood it. It is the undefined statuses between beings, those that are blurred, that make some uncomfortable and others happy. My videos emerge thanks to the paper, to the pages composed of my harvest of images, Polaroids, printed images, amassed and collected. Passing from my own photos to those found in the street, where the characters are strangers. My writings accompany them. It is this pluridisciplinarity which composes my narration, I wander through the images in search of them. A book, like a paper archive, is always made in parallel. I wish to make archives and use the pre-existing ones to make history speak through the banal. Is our telephone photo library the contemporary photo album?

Play me, I’m yours is one of the facets of my families. My next project is intended as a volume 2, addressing more political questions and issues, inseparable from the intimate, in an attempt to address this generational gap that is growing around the family table. 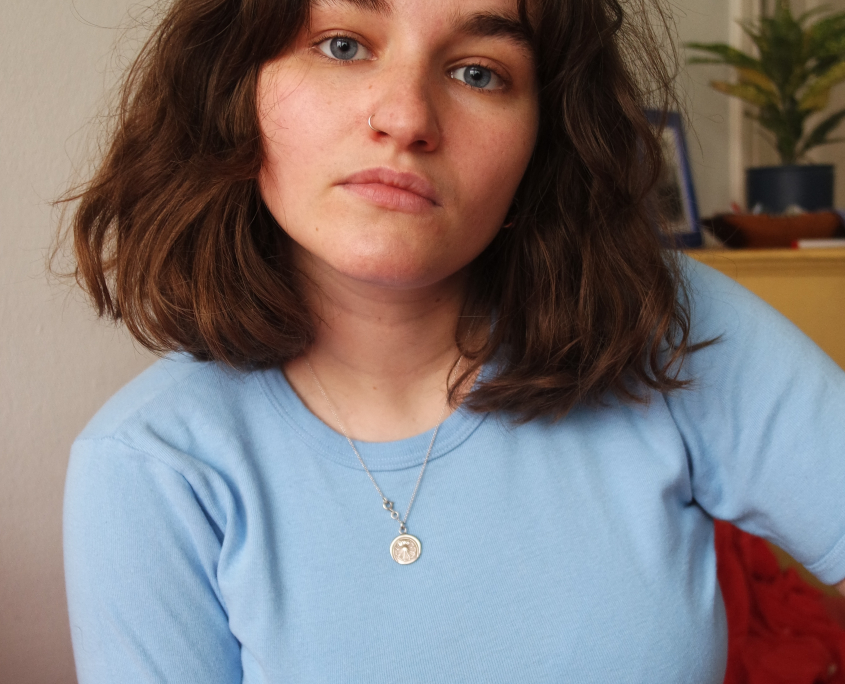 Julia Palmieri Mattison is an intersectional feminist queer artist. Born in 1994, she grew up with her family in the Paris suburbs.

It was while moving from a single-sex boarding school to a shared apartment that she became immersed in the community and the complexities of relationships and shared lives. She joined the Graphic Research School (Erg) in Brussels in 2015. The construction of her artistic practice passes through different mediums: installation, painting, writing, photography and video. Often all indissociable. She highlights the intimacy, abused by the community and misused by social networks. Based on her personal history, her work frees itself from the individual narrative by inscribing itself in larger fields: family, society or time, calling upon a common memory. Julia photographs her loved ones in their daily lives, capturing moments of shared intimacy, within a sisterhood or adelphia, to capture the most sincere moment. Accompanied by family archives filmed and donated by her father, she begins to mix found photos with recovered photos, circulating from one to the other, linking them with texts and recordings of stolen conversations. It is by relentlessly seeking to extract what makes up an individual, to question the imposed limits of love, friendship and family relationships that she makes her first short film: Play me, I’m yours.